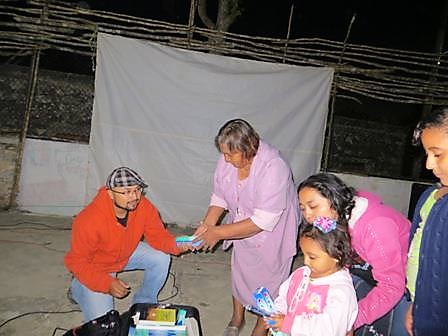 I was a bit concerned when we got to Calotmul and found out that we did not have permission to be in a park. In talking with Pastor Dora Lara Amelia Meza, who heads a small church there, she told me that she was in prayer because she has had had many problems with a witch (sorcerer) who lives in the region. This man had cursed her and the church. We immediately took on the task of locating some of the authorities to insist on the permits, but we did not find anyone. A few minutes later another one of God’s workers came. Pastor Falconery was able to get authorization to be in one of the parks. We started to set up the equipment and found a wall that looked strategically placed. We asked the owner to allow us to put the screen up and explained what it was all about and then invited him to view the film. He agreed and even gave us a hand in setting up. When Pastor Dora came back, she was surprised because precisely where we put the screen is the sorcerer’s home. God gave us great victory that day. I found out at the end that the church was serving only children because it was just beginning and did not have adult members yet. However after the movie concluded we gave to the pastor a list of several adults and children who wanted to be visited and discipled after taking their first step of faith. By the way, during the film I realized the sorcerer was watching from his home. We pray for his life and come against any demons that may be controlling him, hoping one day to give you the testimony of his change of life.